With his book Production of Presence, Hans Ulrich Gumbrecht puts presence at the center of future academic practice in the arts and humanities.  Gumbrecht, a professor of literature at Stanford University, recounts the rise of interpretation to its current dominant position in humanistic activities.  He then explores the much different lived experience of presence.  With appreciation for the value of presence and with concern for the future of face-to-face education, Gumbrecht describes a new structure of nonhermeneutic activities for artistic humanities.  Academics in the arts and humanities can surely benefit from Gumbrecht’s fundamental rethinking of their business plan.

Others who assess value, allocate resources, and produce services in the communications industry might find this book less practical.  Communications industry analysts and entrepreneurs have begun to recognize that presence is central to value in communications services.  Unfortunately, Gumbrecht’s book provides little specific guidance for most entrepreneurs seeking to produce presence at low cost and with high value.  Most persons probably would not easily understand much of what Gumbrecht discusses.

In addition to academics in the arts and humanities, those willing to take risks and venture into new fields might benefit from encountering Gumbrecht’s book.  Gumbrecht points to stimulating paths for exploring the relationship between presence of persons and presence of things of the world.  Gumbrecht also provides an inspiring example of courage and versatility on difficult market terrain.  Many readers might not perceive or respond to these aspects of his book.  But for readers who do, this book can mean a difference.

“This book is dedicated to

whose presence tells me that I am alive,

Production of Presence begins with a section entitled User’s Manual.  Most users will typically skip this.  Yet at least one sentence in the User’s Manual is surely worth reading and questioning:

Presence effects, however, exclusively appeal to the senses.  Therefore, the reactions that they provoke have nothing to do with Einfühlung, that is, with imagining what is going on in another’s psyche. (p. xv)

The evolutionary creation of human beings has probably linked the sense of presence to attunement to needs or threats the other might present.  This built-in sense of presence, activated, for example, through casual chit-chat on the telephone with friends and family, does not necessarily require conscious imaging of what’s going on in another’s psyche.  Does the somatic distinctiveness of persons make presence of another like oneself different from presence of other things of the world?

Quickly moving through about eight hundred years of European intellectual history, Gumbrecht narrates how interpretation became the dominant activity in the arts and humanities.  Interpretation encompasses both old-fashioned (early modern) decoding – following signs to their signifieds  – and post-modern (early nineteenth century) crises of representation and the growth of novel narratives.  Scholars in the arts and humanities became authorities on what texts and other things mean; what they really mean, meaning saying what they really don’t say, but mean, like the trick of turning a story around, or perhaps just traversing it transversally.  Many scholars in the arts and humanities, including young ones, continue to be occupied in such activity.  What else can they hope to do?

No one gets fired for doing a little bit better what everyone else is doing.  That’s usually called being a winner.  Gumbrecht, who clearly has wins in his field, recognizes that using concepts like “substance,” “presence,” and most certainly, “reality,” is considered within the humanities today to be “a symptom of despicably bad intellectual taste” (p. 53).   The only action more damning than referring to “presence” or “reality” might be to quote the Bible or the Holy Qur’an. 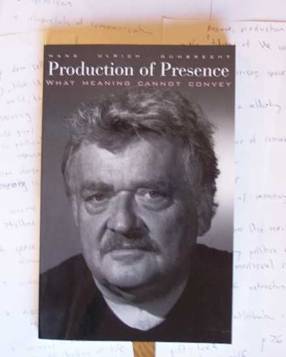 Despite the “soft terror” of taste in the humanities (p. 54), Gumbrecht publicly pledges to seek presence.  Seeking presence, he invokes Derrida, the spectre of Vattimo, Eco, Nancy, Bohrer and Steiner, Butler and Seel, Gadamer, and especially Heidegger (pray for us).  Heidegger sought to replace the metaphysical concept of “truth” with “unconcealment of Being” and to associate knowledge with “events of unconcealment.”  Heidegger’s concept of Being is close to presence.  But here is forbidding ground.  With real pathos, Gumbrecht recounts a friend asking him, “What do you really get out of ‘presence’?” (p. 133)  Other friends suspect that he has become a religious thinker.

Gumbrecht perceives in our culture an intense desire for presence.  He notes:

Contemporary communication technologies have doubtlessly come close to fulfilling the dream of omnipresence, which is the dream of making lived experience independent of the locations that our bodies occupy in space.... the more we approach the fulfillment of our dreams of omnipresence and the more definite the subsequent loss of our bodies and of the spatial dimension in our existence seems to be, the greater the possibility becomes of reigniting the desire that attracts us to the things of the world (p. 139)

Gumbrecht figures contemporary communications as mobile (voice) phones and high-production-cost audio-visuals, e.g. films with beautiful faces, high-quality singing, and other special effects.  Gumbrecht also categories all that is available to be present, including persons, as “things of the world.”  Gumbrecht thus describes the Cartesian mind’s longing for presence.

Gumbrecht argues that the arts and humanities should change to encompass three practices associated with presence.  The first, “epiphany,” presents to students auspicious opportunities for ephemeral, non-conceptual moments of sensuous (aesthetic) intensity.  The second, “presentification,” places students in an alternate, unfamiliar world.   Presentification is already regular practice in good elementary history classes, Renaissance festivals, the Society for Creative Anachronism, the World of Warcraft, and other forums of lively engagement.  The third practice, “deixis,” points to intellectual complexity and gives students time and encouragement to explore complexity rather than seek to reduce it and resolve it.  Epiphany, presentification, and deixis entail movement beyond the boundaries of currently dominant practices in the arts and humanities.

As the rhythms and the appearances of Japanese theatre were conquering my body and my imagination, I remembered the Pentecostal tongues from the Christian tradition.  I also remembered those faces with their suddenly blurred forms and their half-open eyes that we all see at some rare moments of our lives: sweet faces and threatening faces indeed.  Threatening and sweet, religious and not, I do not want to miss any of those faces. (pp. 151-2)

The sense of presence of another like oneself, distinctive among all other things of the world, seems to me to be a complement to metaphysics.

Tell me the truth

as cold as frozen corn.

I want to know.

Tell me the truth.

You can give your

You can put your

marrow into a database.

I want your word.

I want to see your face

and hear yes or no

that only you know.